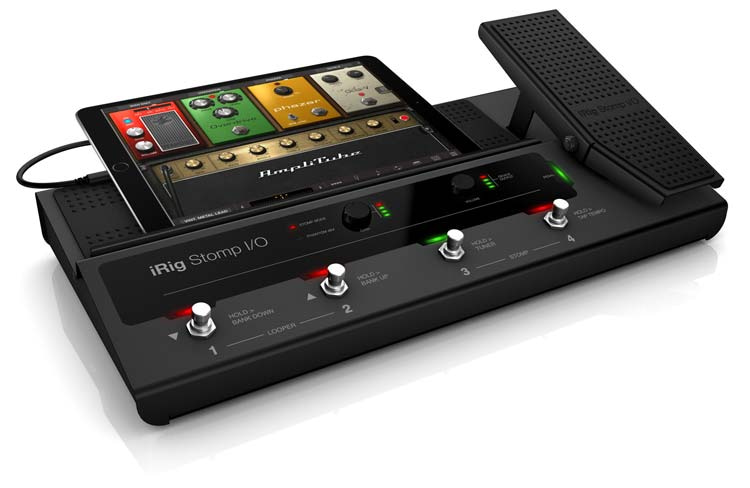 Watch my video review below or scroll down for the written review.

What if you could have every amp, cab and effects pedal at your fingertips without having to buy a studio and spend loads and loads of money…well…that’s the idea of the iRig Stomp I/O pedal but does it achieve that?

In 2018 IK Multimedia released the iRig Stomp I/O. A guitar effects pedal board for the 21st century retailing at an RRP of £300.

The Stomp I/O is a digital foot controller for guitarists, bassists and vocalists which works with a PC, Mac or iOS device…but let’s be honest…it’s largely aimed at iOS usage.

It looks like a traditional multi effects board. It has 4 switches and an expression pedal. It’s largely made of metal and looks smart and feels incredibly durable and well made.

The front also has a bay for putting your iPad or iPhone in and the rubber backing means it won’t move anywhere! There’s also a volume and gain control.

The rear of the device has loads of ports…there’s a input that takes an XLR or jack input, input from a USB or iOS device, a 48v phantom power button, headphone output, stereo outputs, midi in and out, external pedal/switch inputs for further expansion and a power cable slot. (No battery power here)

1 – You can’t record the effects you’ve set up unless you record in Amplitube which means you lose all the functionality of a professional application like Logic Pro. It works as a 1 channel recording device…if you want one!

2 – It’s clearly not the main purpose of this…

So let’s talk about using it as a pedal board

For this I’m going to focus on using it with an iPad because it’s the most practical way to use it because the iPad sits perfectly in the bay and can be easily seen from above.

You connect it via the bundled lightning cable and it even charges your iPad as you use it…a feature they could have easily forgotten but an essential one for long periods of use!

It’s worth mentioning at this point that there’s some amps and effects in the app by default but also lots of in-app purchases so you may want to set some budget aside for buying extra pedals, amps, packs and microphones!!!

The iPad app looks (and is) pretty complicated but spend a few hours playing with it and you slowly begin to get your head around it…it’s complicated because there’s so much packed into it! (This is why the iPhone version isn’t really that useful!)

Let’s talk about the two main views on the app…

This is the main screen that loads when you first open the app. Here you see an amp on the screen, a link to the cab (where you can adjust microphones) and some pedals.

From this screen you can play around with every setting in your rig, add pedals, save and load pre-sets and change out your cab and amp…if you want a Fender cab with an Orange head you can!

There are endless combinations here but some of the presets included help you play around with sounds to start with. You can also set some as favourites.

There’s loads of in-app purchases here…paying for a second cab microphone is well worth it as it beefs up the sound and pedals typically cost £4 each with amps varying. You can also buy bundles (e.g. an Orange bundle around £15-20) or buy everything available (quite expensive!).

If you’re not in a hurry then it’s worth waiting to buy extra stuff as IK Multimedia frequently run promotions that see around 25% knocked off the price.

One of the best things is having licensed packs by the likes of Orange and Fender because this gives you some recognisable, great quality (and sounding) amps and pedals. The effects and sound of your guitar from this product and app are incredbly good sounding!

This default mode also has a tuner, a looper, option to add backing tracks, a built in recorder and a place for drum loops…great for messing around and jotting down ideas.

In my opinion this is where the pedal board and amp come into their own. The live mode has two main settings.

The first lets you scroll through banks (you can tap all the effects and amps to adjust as you go). The second mode let’s you use the pedal board as a way of turning effects pedals on or off…probably the mode you’ll use during a song!

Live mode is nice and easy to use and can easily be used live…it also has quick access (via your feet) to the looper and tuner.

The expression pedal is assigned to a Wah by default (if present) but you can assign it to any control of any pedal you wish!

So, what’s the verdict?

The iRig Stomp I/O is a really good piece of kit and does exactly what I want it to – it gives me a ton of pedals and amps without a huge price tag, providing me with a great array of sounds.

However it is far from perfect, so let me list some problems to bare in mind:

1 – If you want to use the pedal and its effects with your MacBook and the iPad/Iphone app then you have to purchase everything twice because purchases don’t sync between iOS and Mac devices.

2 – The app itself takes a long time to get your head around…they’ve packed a lot in but in the process created a load of extra functions that can feel clunky!

3 – The only way to record sounds you’ve perfected is through the recording function on the app, you can’t plug it into a recording programme like Logic meaning the recording device aspect of the device and the pedal board side are very much two separate things.

So, should you buy one?

If you don’t have the money or space for a huge rig but want a solid pedal board you can update and play around with until your heart’s content then this is for you!

I love the range of effects and amps and it’s a lot of fun,

The simplicity of the live mode makes it a very real option for gigging and being able to use it with acoustic and bass guitars is really nice.