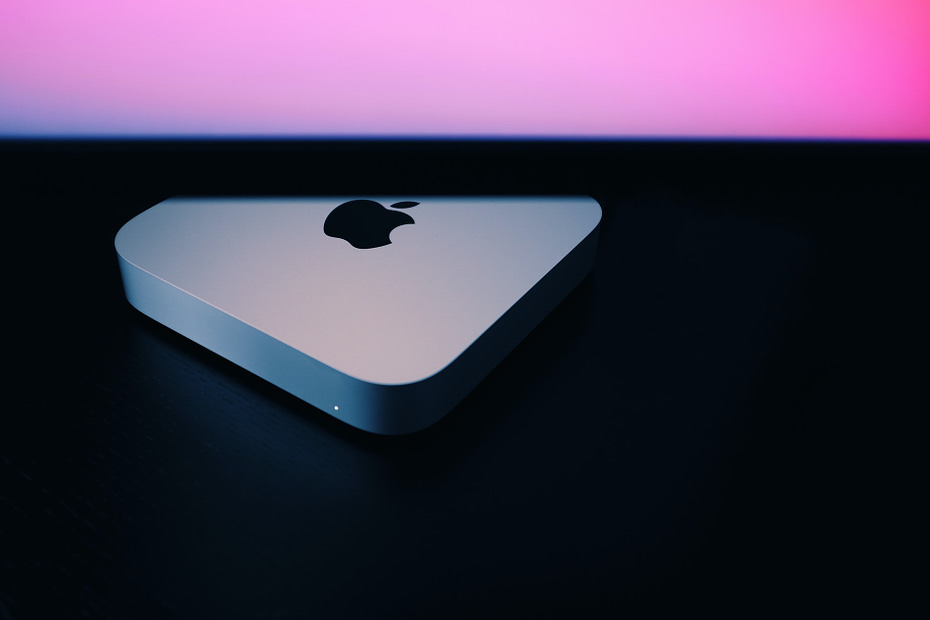 A year ago Apple unveiled the first of their M1 Macs, a selection of computers running Apple’s own silicon processor. For the last 6 months I’ve been using the Apple M1 Mac mini as my daily machine for my full time job as a web developer and so in this post I share my Apple M1 Mac Mini web development review.

The design of the Mac mini has remained largely unchanged for a number of years. It’s a relatively small, lightweight box with rounded corners. It’s pretty slim and looks great on any desk. It’s also portable enough to be able to easily put into a carry case when you need to go between home and the office.

The M1 Mac mini starts at 8gb RAM with 256GB memory and an 8 Core CPU and with a starting price of £699 this is the cheapest Mac on the market.

For developers however I’d recommend going up to the 16gb model and increasing that memory limit too as you cannot upgrade it in the future. I went for the maxed out 2TB memory option as I use a lot of large video and audio files alongside web development.

Alongside the processor speeds the Mac mini has the most ports out of the M1 Macs boasting 2 USB A ports, 2 USB C/Thunderbolt ports, a HDMI port, an audio out and an ethernet port. Between those USB C and HDMI ports it can run two monitors. It boasts Wifi 6 and bluetooth as well, and whilst there were some initial issues with bluetooth connections I’ve not experienced any of these issues at all.

Finally, it’s powered by a standard figure-of-eight cable as well which means you can easily and cheaply have spare power cables.

Now onto the reason why you’re here. What’s the M1 Mac mini like for web development?

The big concern for many with the launch of the M1 Macs was whether all of the apps would work with it and a year later there are no issues at all. Your usual code editors open with no problem (for me that’s Visual Studio Code), Node packages install at lightning speeds, Apple and Android phone emulators load quickly if you’re into app development and you can easily spin up local WordPress sites for development with apps like Local.

In short, I have had no major compatibility issues.

However, it’s worth noting that with Mac Monterey Apple dropped native support for PHP which means if you run a local Apache server without the help of MAMP or Local then you’ll need to set all of this up from scratch!

My daily stack is a lot of WordPress development with Tailwind, CSS, HTML and Javascript plus occasional app development using Expo and React Native and I can honestly say that I’ve experienced no compatibility issues with any of this and that the speed of the Mac mini (and this thing is fast!) has genuinely made me more productive.

What about everything else?

Alongside development I’m into music and video production and the Mac mini handles these without any issues. Huge multi-track Logic Pro files open quickly and can be edited, mixed and exported without the fan even kicking in and Final Cut Pro X let’s you drag in 4K video and start editing it straight away.

With regards to other applications everything opens pretty quickly. The reality is different from those first few ‘open every app’ videos that were floating around YouTube a year ago but loading speed isn’t something I’d complain about, even more intensive apps open in a matter of seconds.

Should you buy a M1 Mac Mini for Web Development?

If you’re a developer looking to get a new Mac then the Mac Mini gives you the most Mac for your money and if you’re happy with using an external monitor and losing the portability of a laptop then I think it’s the way to go. It’s packed full of features, is an absolute power-house for getting things done and has improved my workflow.

If you like video reviews you can watch one here or you can pick one up here.